In systems, where multiple robots operate in a shared area, one has to ensure that the robots do not collide not only with known static and dynamic obstacles, but also with each other. Such a task can be accomplished in the framework of multi-robot path planning by planning coordinated trajectories for the whole multi-robot team. However, the problem of finding coordinated trajectories is known to be NP-hard even for the simplest models of robots.

The known complete approaches suffer from computational complexity that is exponential in the number of robots. In our work we characterize a class of environments called well-formed infrastructures, where solution can be computed using a decoupled approach efficiently (in polynomial time in the number of robots) in a guaranteed manner. 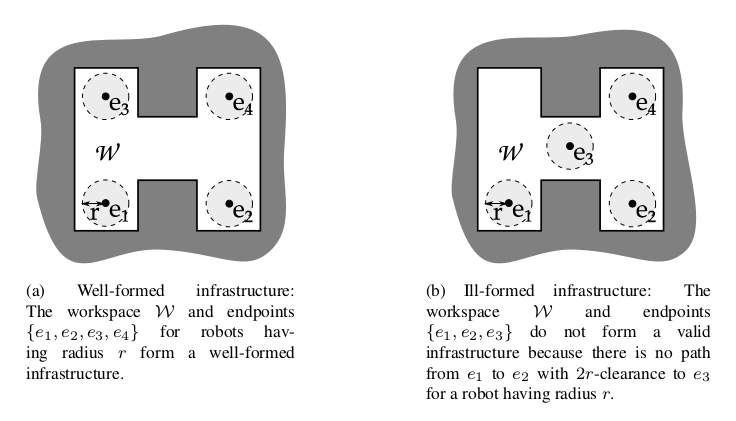 we show that a slightly adapted version of classical prioritized planning approach, where robots plan sequentially one after each other such that robots that plan later avoid collisions with robots that planned earlier is guaranteed to solve all trajectory coordination queries of robots that move between two endpoints of a well-formed infrastructure.

The principle can be also generalized to asynchronous decentralized systems, where the trajectories are not planned centrally for all the robots, but rather each robots uses its own on-board computer to compute its trajectory. Such an approach is not only beneficial in terms of speed of the computation, but it also more naturally applicable to heteregenous multi-robot systems, because the robots do not need to formalize and communicate their objectives and motion constraints to a central solver.

In the following video, we show an illustration of both algorithms coordinating simulated multi-robot team on three real-world maps:

The implementation of the presented algorithms and the benchmark insances used to generate the results in the paper can be downloaded through Github at https://github.com/mcapino/adpp-journal.

we extend the prioritized planning approach to systems where the robots are not coordinated in batch, but rather incrementally during each task assignment. To see when can be such an algorithm useful, consider a factory where the intermediate products are moved between the individual workstations by automated transport robots. A worker in such a factory can call a robot to its workstation, puts an item to a basket mounted on the robot and orders the robot to relocate to another workstation. To successfully fulfill the task, the robot has to coordinate its motion with other transport robots operating in the factory. Even though the coordinated trajectories can be found using a batch multi-robot trajectory planner from the current positions the robots and their destinations, the other robots may be at the moment of planning outside of an endpoint and thus RPP or AD-RPP cannot guarantee the ability to find a solution. Thus, we introduce an algorithm called Continuous Best Response Approach (COBRA) that achieves guaranteed performance even if the tasks are assigned to robots incrementally.

The implementation of the algorithm and the benchmark instances used to generate the results in the paper can be downloaded through Github at https://github.com/mcapino/cobra-icaps2015.